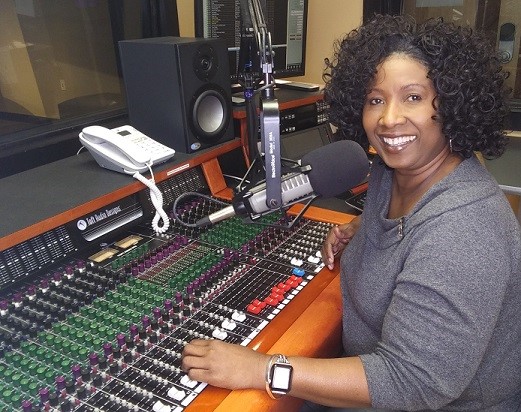 In the ‘50s, with beaches and clubs still segregated in the Jim Crow coastal Carolinas, the doo wop and R&B flowing from Black juke joints and events caught the ears of White teens. Eager to keep up a segregationist facade for parents, community leaders, and other outsiders about the music they enjoyed, the term “beach music” was born. That’s the story Cathis Hall, station manager of Gaston College’s WSGE, remembers being told when she first arrived at the Dallas, NC station in 2006.

“I listened to [the music] and I was taken aback. I said, why are they calling this beach music? This is Black music. This is just R&B,” says Hall. With well-loved music from the scene like The Four Tops and their flowing, soulful, “I Just Can’t Get You Out Of My Mind” or the swinging “In The Middle of Nowhere” by The Platters, she’s not really wrong.

Another form of the origin story depicts a jukebox at the Tijuana Inn in Carolina Beach, NC, in the late ‘40s. There it was said that the White owner, Jim Hanna, started adding Black jump blues 45s into the rotation to give a space for White audiences to listen to Black music. A beach favorite, Maurice Williams & The Zodiacs, had a resurgence in the late 80s when their song “Stay” was featured in a scene from the smash hit Dirty Dancing, which shows the wide-eyed Jennifer Grey following Patrick Swayze to a club featuring the titular, sultry dancing and, almost as forbidden, Black music.

No matter the “real” origin story, if anyone could even claim such a thing, beach music slowly evolved from its Carolina rebranding of ’50s Black music to its own scene. Almost more than a sound, it was the cultural shift of young, White audiences swapping out big band records for Motown 45s. Drawing on local musicians and a supportive network of clubs and, soon, both Black and White DJs, beach music grew to become one the definitive genres for the Carolinas. Beach music also expanded into a distinctive dance, the effortless, gliding shag, which is now North and South Carolina’s official dance. The Society of Stranders, after holding its inaugural shag event in 1980, became what is often the de facto organizational body for the scene, operating regular DJ nights and dance competitions.

Hall had the opportunity to learn about the history from its longtime assembly of beach music DJs. After leading radio stations for 35 years, Hall was quick to realize this storied community could also be WSGE’s superpower. “It has been a wonderful marriage between the station and that beach audience,” Hall says. “In my 16 years of being here, the most money we’ve raised during fund drives have come from the beach music audience.”

When Hall came on board, she worked with Paul Marszalek, known in part for running The Top 22, an online resource committed to the “Adult Rock community,” to give the station, its DJs, and listener community its own, more focused sound. The decision was that WSGE would balance its weekend beach programming by offering Triple A and Blues music on weekdays. To herald the change, a new tagline was adopted, “Your Eclectic Music Station” which has since been changed to “Your Independent Music Source.”

Hall created new ways to encourage and teach more professional guidelines, strengthening WSGE on-air volunteers and the station’s voice. “We have had positive responses from that aspect of our programming under the Triple A banner, where we are constantly engaging local artists. With our current focus on music discovery and recognition, I continue to be excited about the possibilities of continuing to promote artists that are not as readily recognized,” Hall reflects on the path WSGE considered to progress into a proper Triple A station. “Although the Triple A audience has increased from year to year, the station hasn’t lost its place in the hearts of beach music aficionados.” In fact, the Carolina Beach Music Awards named WSGE the FM Station Of The Year for 2011, 2015, 2016, 2017, 2018, and 2019. WSGE supports and celebrates the scene via its own beach programming and chart.

While the R&B and soul music that served as the foundation of beach music extended beyond Black communities, its oft-repeated history of being reframed by White audiences to move away from its Black roots is not lost on many. Discussions on the history of beach and shag and its communities continue to this day. Loyal fans of the genre examine ideas around appreciation vs. cultural tourism and curation vs. gate-keeping, as most of the DJs in the space are White (including those at WSGE), while the artists, especially older favorites, continue to be Black. Yet, there is a good faith aim for intersectionality and artistic interplay, and Hall sees it in her audience.

“In recent years I have begun to get calls from African Americans and others who say, ‘Oh yeah, I like that beach music!’ but never knew a format of this type existed. So it’s been an education of the music as well,” Hall recounts. A portion of this audience growth is certainly due to significant community outreach by station volunteer DJs who play music for shag clubs and other beach events in North and South Carolina. Growth has also resulted from the station hosting the WSGE 97.1FM Beach, Rhythm, and Blues Festival for several years that focused on bringing established artists to the area.

As Hall explores this conversation first hand within the beach community and in WSGE itself, she unfortunately does not see that quite yet happening in the larger Triple A radio space.

“I have not come in contact with other minority folks who are managing or programming Triple A stations in public radio,” Hall remarks when thinking about her place as one of the very few Black women managing a Triple A station. Hall, who spent years leading stations and teaching at HBCUs like Shaw University, Virginia State University, Bethune-Cookman University, and Howard University, looked back on her time in radio, and remembers how her friends, classmates, and former colleagues were often only granted career opportunities at public radio stations with jazz or urban formats, many of which were licensed to HBCUs. She sees this as a possible opportunity, looking forward. “Hopefully just my being in this position will allow someone else who may want to manage or program a music format in public radio outside of jazz to have the opportunity to do so!” Hall says eagerly.

WSGE represents a meaningful way to embrace the local sound and identifies an opportunity  for growth within the noncommercial Triple A space. Built from the passion of a strong volunteer support network, WSGE gives back to an audience that celebrates its unique heritage, and aims to increase their listening public. Serving at the helm, Cathis Hall spent these last 16 years building and learning alongside her staff and volunteers. Hall is focused and excited, remarking, “I continue to look for ways to promote the station. What we find is that when people tune in and find out about who we are, I get emails, ‘I just discovered your station. I just love it.’”