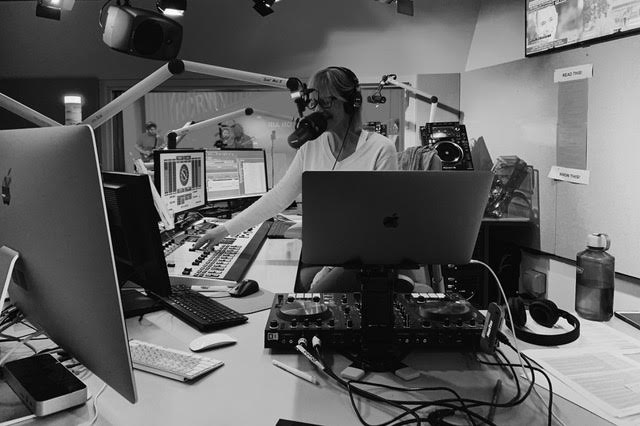 The first woman program director of music is busy building something even better at the renowned LA station.

When Anne Litt took on the job as program director of music at Los Angeles’ KCRW in January 2020, she didn’t think it would lead to her having musicians like Courtney Barnett playing in her backyard. “Oh, well, that was desperation,” says Litt when she talks about how the Anne’s Backyard series started. In the middle of the pandemic, Litt remembers thinking, “We can’t have bands in the studio. We want to do live music. What can we do?”

From there, Litt and fellow team members at the station found a way to build a new series, an idea that came to them after an NPR Music-led webinar and took a cue from Tiny Desk Concerts. “They have Bob Boilen’s desk. I have a view of Los Angeles,” she jokes. It’s an ambition that came from desperation, but grew from overwhelming circumstances that Litt remembers fueling much of the work in the last two years.

When Litt was named program director of music, she had been at the station for 24 years and became just the fifth person leading the music department since 1979. She also took on a position that traditionally came with the job: host of the internationally known: Morning Becomes Eclectic. In February 2021, she passed the host duties to DJs Anthony Valadez and Novena Carmel, but Litt reminisced about that “strange, yet beautiful year” in a blog post where she realized that even during the darkest part of the lockdown, while she hosted the show alone from her home studio, “through it all, we’ve listened to music together.”

That support, especially as she started her new role, gave Litt and KCRW the opportunity to tweak and improve the music operations side of the station. “If there was a gift, the gift for us was that we had to stop doing things the way we were doing and reimagine how we did everything,” Litt posits when asked about that time. “We’ve dreamed up different ways to celebrate artists.”

Part of that celebration included expanding the programming at KCRW. In September 2021, KCRW resumed pre-lockdown programming and brought in five new DJs: Tyler Boudreaux, Francesca Harding, Rocio “Wyldeflower” Contreras, Candace “SiLVA” Silva-Torres, and Nassir Zadeh. With their diverse set of music tastes and DJ styles, Litt saw the need to remember the expansive reach of the station. “If somebody feels included, that’s what I want.” It was also important that they hired four new women DJs because, as she Litt puts it mildly, “The music business has never been terribly kind to women.”

News of Litt’s announcement as program director of music often comes with the mention that she’s the first woman to hold that title at the station. She’s proud of that fact, and remarks that she and KCRW are hoping to “create a workplace that feels, you know, correct. And feels welcoming.” KCRW has prioritized building a more gender-diverse senior management team. “I have four bosses, and they’re all women: our CEO, COO, CFO and Head of People,” Litt notes.

However, for Litt, how the DJs’ roster looks and what’s being played on air has a deeper meaning than token titles or even historic firsts. “We want to be welcoming to everybody and music too,” Litt recounts, speaking to the service aspect of noncommercial radio. “We ask ourselves every time we want to do something: ‘How does this serve the community? How do we find new communities? Where do those people come from? How will this make a dent?’”

Litt remembers fondly about starting her DJ path as a student DJ at University of North Carolina – Chapel Hill’s radio station WXYC and has also DJed at commercial stations throughout the years. She holds a special kind of joy working in a station like KCRW. Noncommercial radio often has community service as a core of its commitments, something KCRW and Litt are focused on right now. Currently, Litt and her team are building out the music offerings for the station’s recently launched Young Creators Project. It’s a dedication with the people who make up the station and the tireless work they do that makes it such a unique experience for Litt.  “Once you get under the hood of this non-commercial radio experiment, there’s so much humanity in there,” she says when expressing her love for the mission of the station. “I just appreciate the heart of it.”

All noncommercial stations aim to serve their communities and listenership, but it’s the station staff and leadership like Litt who embody that mission. “I’m really blessed to be here,” she replies as she remembers early mentors at KCRW, fellow DJs Chris Douridas and Liza Richardson, and the drive they all have together at the station. “I kind of have the best job in the entire world.”