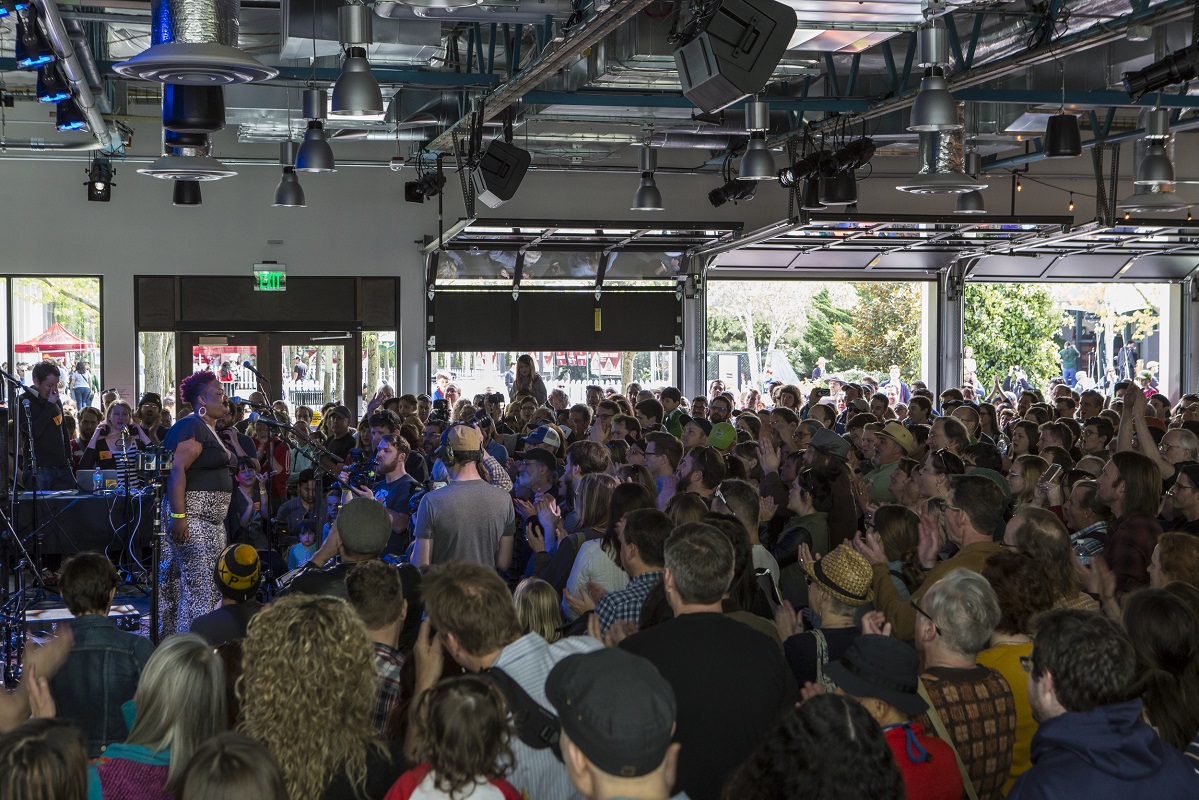 Already one of the country’s best-known noncommercial stations, KEXP reimagines how to connect Seattle.

KEXP is a powerhouse of the noncomMUSIC space and is recognized not only by local fans in Seattle but nationally and internationally. The station quickly cracks the misconception that public radio music can only be experienced on the air, instead creating a space where community members can connect and cultivate music habits that stretch across platforms.

KEXP’s On-Air Events Coordinator and midday DJ Cheryl Waters shares, “Even though we have a terrestrial signal, we don’t think of ourselves as a radio station only anymore. We are a content provider curating meaningful music in any way that you want to consume it. Whether it’s podcasts, videos, or a live studio here at the station, or it’s streaming online, or using our mobile app or any way you want to hear our music. We want to enrich your life through music and discovery and bring you the music in the way that you want.”

The noncommercial music station set out to intentionally build a space that was more than a place to record and broadcast music on the radio. KEXP successfully created a place where the community can connect and share their love for music and the arts, demonstrating what it means to be a modern public radio music station.

When the space was completed in 2015 it garnered major headlines from the city’s largest paper and was nationally recognition by alt weeklies, tech blogs, architecture magazines, and the wider music press. And for KEXP’s community it became a comfortable space to enjoy a cup of coffee from the in-studio cafe, view the latest art exhibit in the station’s music-themed art gallery, or get a glimpse of KEXP and the Emerald City’s role in the independent music scene through the space’s record shop.

Sharing the Experience of Making Radio

KEXP’s space also gives its community a window into the world of public radio music… literally. During live in-studio sessions, 75 community members can gather around and watch artists perform through a window between the community gathering space and recording the studio.

Waters understands the kinetic energy the live session means for artists and fans alike. “We think there’s something special about when a band plays in studio. So there’s that electricity,” she said.

KEXP brings the electricity to life through a state-of-the-art lighting rig – something akin to a high-tech version of their old studio’s Christmas lights strewn walls – during each performance due to a generous donation from Microsoft.

As the person often guiding those sessions, Waters says she’s “so excited that we can invite an audience in to see live radio in the making, and we want them to feel like they’re peeking in to this live radio being created as opposed to going to a concert.”

Connecting with the Audience

Waters considered her spot in the fishbowl studio at one end of KEXP’s community space incredibly lucky.

“I love to look out there and see who’s visiting. And I used to think that when people came up to the side window or the front window I would just keep working and pretend like I didn’t see them and that I was just the busy DJ. But I love it and I smile and I wave.”

She does have her favorite audience as well. “The highlight of my day is when this little preschool comes in every weekday. They’re all wearing these little capes and they’re all holding hands when they come in.”

No matter the age or size of the audience, KEXP has found itself with a group of people far beyond its walls that allow the public radio station to think about and expand the way it creates community through music.

Waters explains, “As our audience expanded and our community expanded, you know, we realized how much we rely on that that energy and inspiration and enthusiasm, and it’s just the heart and soul of the station.”