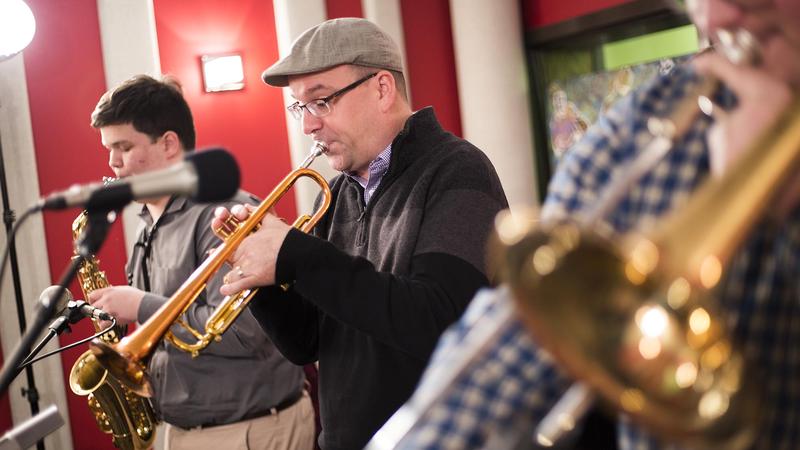 School of Jazz gives high school students visibility and mentorship while strengthening the future of America’s most treasured musical heritage.

The Seattle area is especially fertile ground for jazz, according to Abe Beeson, the on-air host of jazz programming at public radio music station KNKX. The fan base is large, diverse, and passionate, and strong jazz education programs at area high schools are cultivating promising new talent.

So it’s no surprise that there’s considerable interest among high school jazz musicians in the station’s School of Jazz. The program provides mentoring and visibility to budding Seattle-area jazz musicians. What’s more, it’s preserving the genre, giving many fans confidence that jazz’s future will be as exciting and inspiring as its past.

When it began in 2005, the School of Jazz selected a dozen high school jazz ensembles – mostly big bands – to participate. They received firsthand guidance from experienced, working jazz musicians, as well as a professional recording session and inclusion on a KNKX compilation CD.

In more recent years, the School of Jazz has focused on smaller ensembles (from trios to octets) emerging from area high schools. Most get three or four sessions with a professional mentor and the opportunity to appear on KNKX’s Studio Sessions – live, in-studio broadcasts that have featured visiting international jazz luminaries and local stars. Studio Sessions also airs graduates from the Seattle JazzED Summer Advanced Institute.

Considering that KNKX is, as Beeson says, “the cornerstone of jazz broadcasting in Western Washington,” those live sessions give up-and-coming musicians precious visibility that can help their careers. They get even more exposure when recordings from Studio Sessions end up in the station’s rotation for its many jazz shows.

KNKX works with area venues and universities to give School of Jazz participants performance opportunities, such as a recent show at Seattle Pacific University’s Nickerson Studios. The station also invites them to DJ a live broadcast show.

Since its inception, the School of Jazz has directly engaged with nearly 3,000 jazz students, band directors, and professional musicians. But a few recent alumni of the program have achieved greater musical heights:

The School of Jazz – along with KNKX’s extensive jazz programming over the air and online – is not only adding to the pool of working jazz musicians, it is also introducing new generations of people to America’s most treasured musical heritage. High school is the “age when you go through your obsession with music,” Beeson adds. “It’s when they get on that jazz track early.”