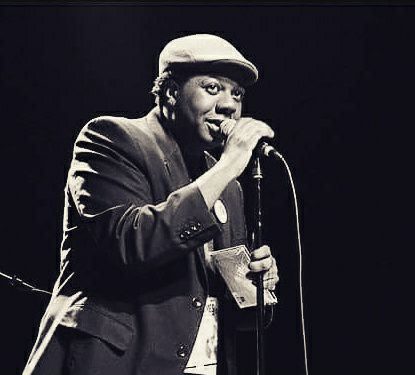 Jamal Ahmad’s calm, intelligent, and curious voice can be heard weekday afternoons on WCLK, Atlanta’s jazz station, which has earned him Atlanta Journal-Constitution’s Best Afternoon Drive Time DJ award twice. On Saturday nights he takes a free hand with his signature show, SOUL of Jazz, playing underground soul and jazz artists from the 1970s to today. Many of the singers who were launched out of the neo-soul era like Maxwell, Floetry, Incognito, Erykah Badu, and D’Angelo were first heard on Atlanta radio through Ahmad’s show. He received a proclamation from the Atlanta City Council for helping to elevate the city’s national profile as a mecca for vocalists and musicians. We caught up with Ahmad (pronounced Ak-med) to ask him how he became a leading taste-maker in public radio jazz.

How did you discover jazz and soul?

As a kid I was into mom and dad’s stuff. Stevie Wonder, Earth Wind & Fire, Evelyn “Champagne” King. Hip hop was the first music I could call my own. Run DMC, A Tribe called Quest, Prince. I discovered jazz when I was 10. That’s when I first heard WCLK. It was divine timing. I turned the radio on in my room and the first thing I heard was John Coltrane’s A Love Supreme. I’d not been exposed to jazz and didn’t know what to call this captivating instrumental music. Then when I was 17 I went to Morehouse College, close to WCLK, where the signal was good and found it again and just fell in love with it.

How did you get on the air?

I came to the station in 1994 as a college intern. That’s where I learned to produce spots and be an on-air host. I actually went to school to be a teacher. But I loved the music. I was always a fan of WCLK more than anything. My passion for the music brought me here.

Describe your show on WCLK.

SOUL of Jazz is an acronym for “sounds of universal love.” It’s really a show all about being a bridge for young people into jazz music, and to do that I stretch and bend the genre from new soul to funk, fusion Afro-Latin, Brazilian, Trip Hop, and many other styles. I’m pushing the music a little deeper into being genre-less. I can blur the lines but use jazz as a backdrop. Some people call it urban alternative but for me it’s about breaking new sounds in the world of 21st century music.

How do you put the show together?

I curate from my personal record collection but every week I also get 10 or 15 new albums and singles from labels all over the world. I guess I’ve been doing it so long the music comes to me. I deal in what Euros call rare groove. Classic soul–artists from the 60s and 70s and 80s. I try to showcase really great songs. I’ll play household names like Marvin Gaye and Al Green and Mary White but choose songs from their lesser known albums. Some of the best discoveries come from albums considered commercial flops. I’ll also showcase soul artists who aren’t household names but known to soul fans, such as Leroy Hudson. Adding to the classic soul I’ll play a really wide variety of styles that I love.

That’s a loaded question, because I can find soul in music of the Clash or in the music of John Coltrane. Soul is always there and present in everything. Dolly Parton and Whitney Houston have soul. But as a genre it is the next level of Rhythm & Blues. Ray Charles and James Brown took classic R&B and made it earthier. Soul artists added rhythmic elements of funk and jazz. Soul is also infused with the music of the Black church. It’s a hard question to answer because soul is where you find it. It could be anything to anyone.