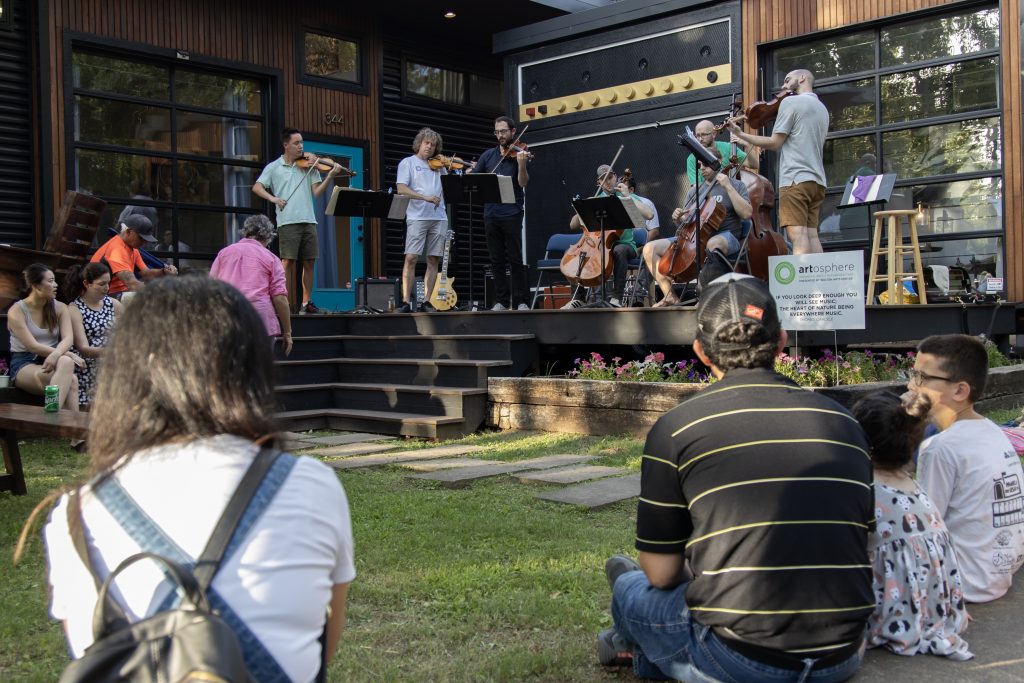 Classical music is one of the most fundamental musical genres. It has formed the basis of many types of music in all parts of the world, and is constantly evolving. Yet classical music maintains a reputation of being inherently exclusive. But in Arkansas, one local concert series is working to change that.

The Trillium Salon Series, a creative endeavor from Katy Henriksen and Glenn France conceived in 2016, offers local audiences the chance to experience classical music in a much more accessible way. Henriksen is the classical music and arts producer at KUAF, the flagship public radio station serving northwest and western Arkansas. The longtime host of their classical music show, Of Note, Henriksen has spent many years bringing fresh insight into the world of classical music to KUAF’s listeners. But she realized that making classical music as accessible as possible meant bringing it beyond the airwaves and directly to the community.

Achieving this kind of intimacy often involves creative re-imaginings of venues far outside the typical understanding of “performance spaces.” Art galleries, coffee shops, even Henriksen’s own living room have all served as sites for the Series.

With the use of such spaces, Trillium events are able to remove the barrier between performer and audience member and allow attendees to be active participants in the music they are experiencing. Says Henriksen, “It’s truly an alive event that doesn’t happen without those who join in.”

By eroding the perception of classical performances as passive experiences, Trillium re-defines their audience members’ role in the genre and gives them the opportunity to take ownership of their identity as classical music listeners.

Importantly, breaking down these barriers allows concertgoers to form connections with fellow audience members. Trillium events are uniquely community-centric, using live classical music not only for its entertainment value but also as a means to educate and unite fans coming in with all levels of background with the genre. As the series has grown, it has expanded its reach to classical, new and experimental music.

Not only are events like the Trillium series key to helping the local music scene flourish, they are also vital to preserving the presence of classical and jazz music in the area. By showcasing unique community talents these events create one-of-a-kind experiences that draw in new listeners and keep old fans coming back.

Another part of the Series’ draw is its accessibility – admission is always free, with an optional cash donation – ensuring that interest and passion are the only requirements for active participation in live music.

The Series has hosted four major community events in 2019 alone, including a New Year’s potluck celebration and performances from award-winning pianists and percussionists. Most recently, they organized the first Trillium Salon Art Block Party. The event, a collaboration with the Tiny Amp House, Spring Shop Studios, and musicians in the Artosphere Festival Orchestra, took place on Friday, June 21. In addition to live classical music, the block party provided a variety of activities from portrait drawing to ceramic making.

Considering the range of the block party, it’s safe to say that the Series is still rapidly growing. Events have expanded to include more experimental artists and different types of art, such as visual displays. To Henriksen, broadening the scope of the classical genre may be the key to helping it reach the most people.

“We truly started with an idea that was open to evolution from the get-go,” she says. “And what we’ve seen is a hunger for experiencing live classical music this way.”