The Silver Jews and Pavement members along with WTJU’s General Manager share how the station has shaped the sounds of Charlottesville and beyond.

Pavement and Silver Jews had members that worked at WTJU. So did a current member of Yo La Tengo and the founder of Jagjaguwar. Some of them were even there at the same time. What about the University of Virginia station gave rise to a number of the biggest names in independent music?

If you think about it, it makes sense that a former college radio station helped foster bands and labels now found on almost every college and Adult Album Alternative (Triple A) station in North America.

David Berman, band leader of The Silver Jews, and Bob Nastanovich, longtime member of Pavement, share how they grew from college radio DJs at WTJU into leaders of the format.

Bob Nastanovich: I met David in the Fall of 1985 because we’d run into each other at shows and in the dorms. Charlottesville had cool music venues back then like Trax, C&O, and The Mineshaft Cellar. I’m confident that David would concur that The Glenn Phillips Band at C&O was one of the best shows we ever saw. That dude was far out, and we were amazed.

Berman and Nastanovich met another person around campus, the main force behind Pavement, lead singer and guitarist Stephen Malkmus. 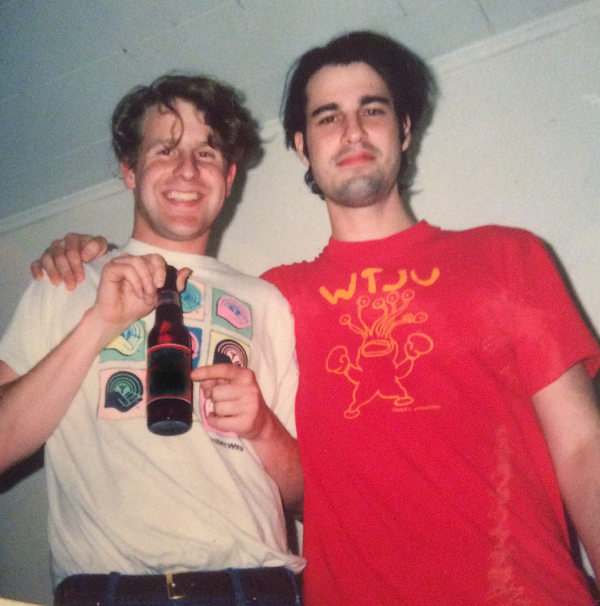 Bob Nastanovich: I met Stephen a little bit later. He was a year older and his first year roommate, Ken West, went to the same small Richmond high school that I did. He was part of the same scene in Charlottesville. We watched a lot of sports on TV. The University of Richmond Spiders basketball team made a great NCAA tourney run in ‘86, and we both dug that.

David Berman: I met Bob the first week or so of school. Steve was a year older and he and I caught a ride to D.C. to see The Cure later that fall. He sat up front and talked to the driver about super-esoteric and lightly nauseating records by Crispy Ambulance and Nurse With Wound.

As the three of them found friendship at the station and around town, it was in the DJ booth where something really flourished.

Bob Nastanovich: Around the same time, the three of us got radio shows at WTJU. That solidified my friendships with both but I had become fast friends with both already. They were great friends to have. The road trips were enjoyable.

David Berman: Me and a friend got a 2 – 6 a.m. shift every week. The show was fun and chaotic, but I was really into it for the access to the tens of thousands of LPs and CDs I recorded to audio cassettes.

Bob Nastanovich: [I was at WTJU] from early in ‘86 until the Summer of ‘89. First, I DJed a 2 – 6 a.m. rock show called The Dolphin Field once per week. Eventually, The Dolphin Field moved to the midnight – 2 a.m. slot on Saturdays. During those years, there was more of an emphasis on the music you played than your technical skills. So, rock shows were often far out and sloppy.

David Berman: John Beers was the rock director concurrent to the time. His band, The Happy Flowers, were on Homestead Records, which along with SST and Touch and Go were the big three of our era, and beloved by Sonic Youth and Gerard Cosloy. They were funny and atonal and entirely credible in New York. [They were] leaders in the field.

Bob Nastanovich: In ‘88, I ran unopposed for station manager. It was fun to get the station’s mail, and I promoted the same carnival atmosphere that I had always known there. The rock shows were mostly shambolic. I can imagine that the classical, jazz, and folk music DJs were unsettled but I tried to keep the studios clean and the gear in working order. When I ceased my role, a program director named Mark came in and straightened things out. To me, he took most of the fun out of doing radio shows but I suppose some of the things were necessary.

David Berman: It would be great to see those [now lost due to storage issues] song lists today. What we actually played. We entered each song on the forms in the logbooks. I was a handwriting talent in list mode, and a pretty funny marginalian. Mostly I would love to see what we played, those four-hour Steve and Star Keene shows were incredible. I’d like to see all I’ve forgotten about. Bob’s playlists were a sight to see. I never saw him sharpen a pencil. He liked fat blunt caps really thick and deeply penciled in:

Bob Nastanovich: We didn’t actually [perform] much music there although Malkmus sang and played guitar to his public service announcements and Berman sang crass lyrics during a brief Ectoslavia live performance that we did during a late-night radio show. We were harpooned.

WTJU was a place where a deepening appreciation of exploring new music became a bond for the three artists, giving rise to a kind of musical connection that would lead them to form the The Silver Jews not long after leaving Charlottesville. Shortly thereafter Malkmus formed Pavement, which Nastanovich would go on to join.

For current WTJU General Manager Nathan Moore, it’s an idea and feeling that makes sense and speaks to the kind of community the station has long helped foster within its walls.

Nathan Moore: The thing about college stations as a whole is that–and I find this almost wherever they pop up–is that they always end up being a bit of a fraternity for misfits. And I think you could describe WTJU in its early years as that very much. It still is now, in some respects.

WTJU is not student-run anymore. In 1993, WTJU hired its first paid staffer, General Manager Chuck Taylor, who shifted on-air focus away from the students over the course of his tenure. In the years and GMs since, the station and its staff shaped into the volunteer- and community-run organization it is now. As Moore understands it, despite some bumps along the way, they’ve found something a bit more professional, which retains the spirit of much of what went on during those early years.

Nathan Moore: We are very much an adventure for your ears. We are an eclectic music experience, sprinkled in with a lot of community stories and real connection to a genuine place and community. We do that with a whole different bunch of genres of music. We start the day with classical and then have another evening block. After that morning block, we switch over to jazz, then we switch over to folk and rock and roots and world music. And so if it’s good music, it’ll eventually get played on WTJU.

Moore points to a throughline from the start of the station until now that’s visible in their DJs and what they play on-air.

Nathan Moore: I talked with [freeform radio pioneer] Bob Fass at one point. I said, “How do you define freeform?” And the way he put it was, “Using all the resources you have at your disposal to make something creative and good.” Well, that’s cool. In that respect, yes, we’re freeform. In terms of playing literally anything and everything at any given time, not quite. […] We’ve got some shows, though, there’s no way to describe but freeform.

To keep its college radio roots alive in a way that incorporates the values of those early years and continues to nurture the university’s relationship to its students, WTJU also launched a second station in 2016 that’s entirely student-run, WXTJ. And Moore acknowledges something that’s at the heart of WTJU, from its past, to WXTJ, to its present role in the community.

Nathan Moore: It’s amazing how this ethos of a DIY scene and ethos of a place where people are encouraged to follow creative paths and to make something of their own. I mean, that’s a big reason why a lot of people go to college. To be a part of a big, creative community and be in charge of making something that’s theirs and try things out.

Nastanovich and Berman saw their time at the station in similar ways.

Bob Nastanovich: WTJU significantly expanded our musical experience. Their record library was excellent and there was a steady flow of new releases bolstering it steadily. All three of us indulged in their collection while on and off the air. Plus, most of our colleagues in the rock department were excellent, knowledgeable DJs influenced by a variety of genres.

David Berman: Well, the music was the education. WTJU was the study hall.

And now, for Moore and the staff of WTJU, it’s a kind of education that extends beyond the DJ booth.

Nathan Moore: At the end of the day, all we have is trust. What’s our product? Our product is a bunch of radio frequency moving around in the air. That’s not sellable if there’s not trust. And so I take it really seriously. And I think the station as whole takes it really seriously.

It’s the spirit of DIY, the idea that you can find something that means so much to you and use it as a way to hone your craft, find people like you, form a community, and make something that is meaningful and worthwhile. It has become an animating principle for the station, from its student-run origins to its broader focus today.

Nathan Moore: We always want to enrich the culture of Virginia, and we bring people together through shared music experiences.

Bob Nastanovich: In general, WTJU helped me with confidence when I was a young man. I made a lot of friends there. There were many DJs, both older and younger, who were either cool or talented or both. We had too much fun and WTJU broadened my musical horizons.