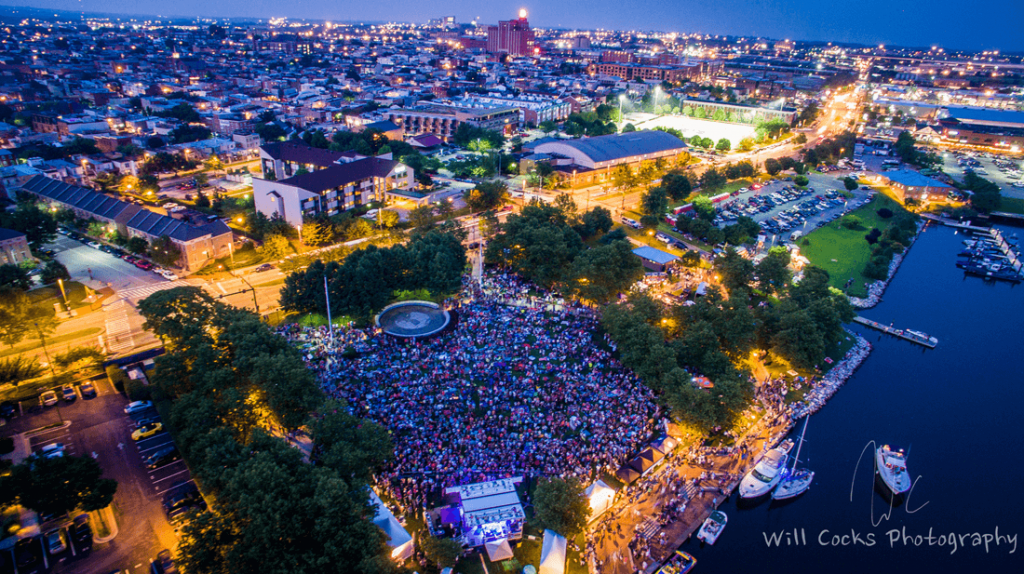 With a regular attendance of nearly 10,000 people, WTMD’s First Thursday Festival concert series is the highlight of a jam packed event calendar curated by the station.

When Public Radio Music Day 2022 was announced, it came along with this year’s tagline: “Discovering the Sound of Local Communities.” Plenty of radio stations celebrate bringing their community together, but few do it like WTMD. On the first Thursday of every month, from May through September, 10,000 people gather at the Canton Waterfront Park in Baltimore, Maryland, for the First Thursday Festival concert series produced by the Triple A station. Local artists kick off the shows, a DJ sets up a booth in the park, and big name, touring artists headline. It’s not just the musicians that draw the crowds, though. WTMD partners with various groups in the area, like Made in Baltimore, to celebrate all the city has to offer. “It’s also to provide opportunities for artists and small businesses in our area to get them out there in the community,” says Kristin Laporte, Director of Development and Marketing. It’s a wide range of community members, says Kirsten Scofield, Sr. Director of Finance and Administration. “We have between 20 and 30 crafts and artists, and then about 20 different kinds of food vendors, as well as local businesses.” And despite the scope and scale of such an event, entrance has always been completely free. “It’s a collaboration that allows for a lot of different kinds of people to shine in one space,” says Scofield.

First Thursdays are now the Baltimore region’s largest free concert series, but it wasn’t always that way. Starting shortly after the station shifted to a Triple A format in 2002, the event had a more humble beginning at Mount Vernon Park. “It was just a way to get out into the community, to show the area what WTMD was about,” remembers Laporte. “I would say it was maybe 1,500 people. We probably had one guy selling food.”

With the immense undertaking that First Thursdays is now, there has to be a core idea behind the event. For Carrie Evans, WTMD’s Program Director, it’s all about what the station means to her. “There are a couple of factors that make radio relevant and one of them is localism,” remarks Evans. Laporte agrees, speaking to a uniqueness of noncommercial public radio across the country, one that can draw from just who is on-air, “The person sitting behind the mic is going through exactly what you are.”

That localism driving the WTMD team comes largely from staying in touch with their listeners. WTMD typically holds around 50 ticketed and free events a year, so it’s out in the crowds, connected with listeners in many ways. It’s also through surveys and in-station testimonials Laporte is proud to share, “We get the pulse of what they want and need all the time. We’re constantly reaching out to find out what is important to them.” When prompted, Laporte agrees on a particular feeling from that kind of outreach, “It starts with the warm fuzzies. It really does propel us to want to work harder and do better for the community. I would say that hearing from those testimonials, when we hear them on the air, it inspires us to be better.”

First Thursdays represent the peak of WTMD’s ambitions of channeling what they do on-air and evolving it into the live experience. Even with all the hard work and coordination that goes into putting on such a large event, the team holds themselves to the same kind of commitments they have for their playlists. “In my perfect world, there would be people of color and women represented at every single First Thursday. I’ve almost done it. I think that this year in particular, I’m really proud that we have had a lot more women on the stage,” Evans shares when expressing the ideal kind of line up for their live shows, something Scofield and Laporte both agree with, “We’re always looking for diversity on the stages.”

With an inclusive eye for a broadening genre, WTMD is always eager to start that love of music and form a bond with the listener through their playlists. “It’s a love of music that connects all of us,” says Scofield. In a separate conversation, Evans agrees, speaking to the progress she’s seen among the noncomm world, both stations and listeners, “In the news and in some of our politics recently, it feels as if we’ve taken some steps backwards. However, when you look at what’s happening in radio, it is all forward momentum.”

Evans puts a lot of emphasis on what the station’s genre does for that community relationship, “One of the beautiful things about Triple A is that we are able to help people discover music and to take our knowledge and our experience and our work ethic to find the new music and curate it. It’s this ultimate level of sharing. It basically comes down to being able to share with our audience and to really feel like you have a relationship with them where they come to rely on you to know that.” Laporte saw that in sharp relief during the pandemic, remembering how the station was providing companionship and comfort, “It’s the stuff that’s getting people through their day and keeping people sane.”

Now that people are getting back out and rediscovering their local communities again, WTMD is ready. In mid-2021, the station was purchased by Your Public Radio Corp., officially merging with local public radio news affiliate WYPR on Public Radio Music Day 2021.  Coming off the merger and having done a virtual series in 2020 and 2021, this year’s First Thursdays concerts offer up a way to not just share in a community relationship with the Baltimore area, but also use the station’s time and knowhow to give back. Joining forces with WYPR only strengthens and reinforces their commitment to community outreach. “I finally got a chance to work in the arts in my community and where I was, I was watching ticket prices go sky high,” Scofield remembers of her earlier career, while shifting to what sets WTMD apart. “It is part of our mission to be able to provide this to the city and to the county. It’s for people from all over. It’s a gift to be able to give that to the community.” For the entire team at WTMD, connecting the staff, musicians, and community together is the beating heart of what they’re doing every day.