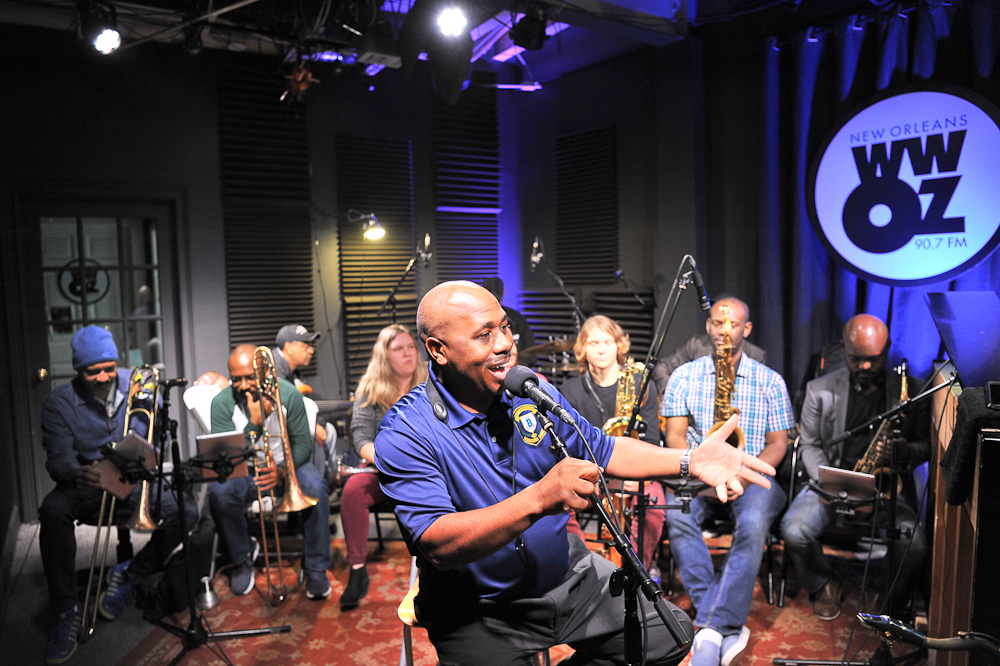 The sounds of New Orleans music are all at once vast and distinct. Longtime residents are a wealth of knowledge, having jammed, danced, and marched down the street with brass bands performing with influences from Dixieland to Afro-Cuban.

“Those influences had a great impact on my life,” said Clark Knighten, a musician and native New Orleanian. “I literally have been making a living playing music since I was 14 years old.”

Like its neighbors, WWOZ public radio believes New Orleans is something to be cherished. Located in the city’s musically vibrant French Quarter, WWOZ is committed to New Orleans’ music preservation and evolving music culture. At the same time, the radio station cultivates relationships with artists through an environment that demonstrates an appreciation for their talent.

WWOZ’s live performance studio is pre-set with a piano, drums, and amplifiers for guitars and bass, as well as cameras for top quality video. Young emerging artists who have performed in-studio include saxophonist Trevarri Huff Boone, The Original Pinettes Brass Band, and vocalist Christien Bold.

“It’s so turnkey for artists,” said Scott Borne, director of music at the station.

Recently, WWOZ hosted 29 bands for in-studio performances that were broadcast live during the station’s annual pledge drive. “It’s a great way to show our extended family to the audience,” said Borne.

The programming department aims to be as artist-centric as possible. It’s a core principle that can be seen in every interaction WWOZ has with the artists who grace its airwaves.

“We can be a real asset in a town that has so many musicians,” said Borne.

According to Borne, over the years many local artists have been marred by bad contracts elsewhere around town.

“We’ve had to overcome artists who were gun-shy about signing anything,” said Borne. “A lot of what our office does is work closely with artists by staying in contact with them. We take it very seriously […] We see a lot working with young artists. When we put paperwork in front of them, it’s new to them. We literally sit with the release and go paragraph for paragraph explaining, ‘This is what this means and everybody is going to get this payment.’”

Explaining the contract language to artists can be difficult, because the underlying music copyright and licensing structure is complicated and varies based on several factors including the track or how the performance is shared. Overly complex music licensing makes presenting music difficult for everyone involved, artists and stations alike.

In addition to helping artists navigate contracts, WWOZ prides itself on paying artists a stipend for remote broadcast events – something Borne believes is rarely done, if at all.

“We thought if you are going to use an artist to bring people in, it’s a gesture and goes a long way,” said Borne. “The catch-22 of living in New Orleans is it can be a challenge to eke out an existence [as a musician], but [outside of the city or state] it’s a place that people look to for its music culture.”

If an artist is apprehensive about signing a deal, WWOZ can act as a connector to local resources like The ELLA Project, which provides pro bono legal advice to musicians, artists, and culture bearers. Ashlye Keaton, chair of the community advisory board at WWOZ and co-founder of The ELLA Project, views the station as more than a business. She describes it as a cultural hub and advocate for artists and the community.

“WWOZ does a really good job of providing access to the New Orleans music scene while also acting as a de facto promoter for musicians looking to develop audiences outside of New Orleans,” Keaton said. “In that way, WWOZ is not only a cultural hub, it’s also an economic engine for our local musicians.”