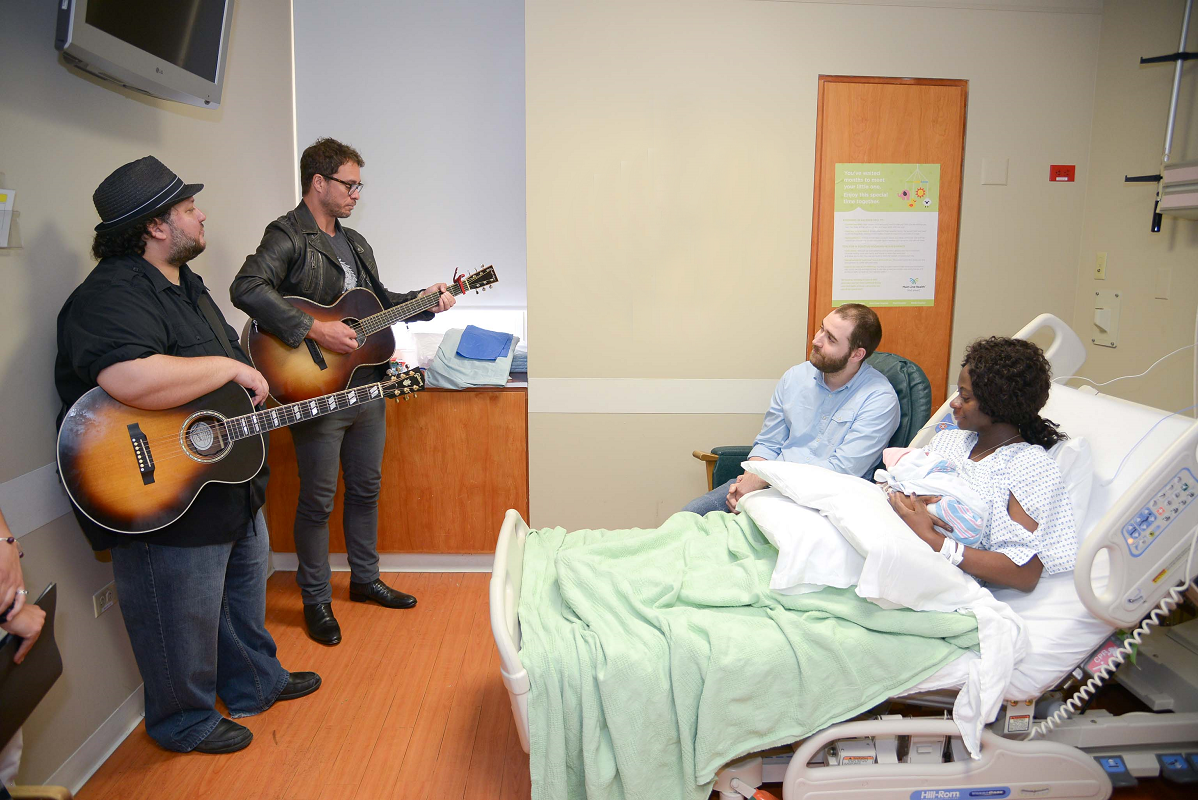 For 15 years, Philadelphia’s public radio music station has coordinated live performances at hospital patients’ bedsides through WXPN Musicians On Call (MOC). The partnership between Philadelphia area hospitals, volunteer musicians and guides, and the noncommercial music station has brought the healing power of music to over 100,000 patients and their families.

A Legacy of Volunteerism

When WXPN first emerged on the burgeoning adult album alternative (Triple A) scene, it was a volunteer-run college radio station. Today, professional staff, University of Pennsylvania students and alumni, and community volunteers work together to produce locally and nationally-recognized content that helps listeners discover new and significant artists in rock, blues, roots, and folk.

“For a short, brief moment, [WXPN MMOC] helps our patients forget that they’re in a hospital, and that they’re sick,” said Vera Solimine, a Registered Nurse at Thomas Jefferson University Hospital, in an interview with WXPN.

The program has steadily expanded from two facilities to eight around the Philadelphia area, coordinating 10 weekly hospital visits, with 82 volunteers and 114,000 patients served. Its greatest challenge, according to WXPN Associate General Manager Quyen Shanahan, is that current public interest is greater than available resources.

Operational funding comes from donations, grants from private foundations, and proceeds from their annual 5k race.

A Strong Volunteer Base

WXPN works closely with local hospitals to ensure that volunteer guides and musicians who participate in the program are properly vetted and well-equipped to handle sensitive and often emotional situations.

“It can be hard for some of the musicians,” said WXPN Marketing Director Kim Winnick. “They’re seeing people at their most vulnerable.”

Volunteer musicians range from amateurs to aspiring professionals to recording artists like singer-songwriter Amos Lee. A long-time volunteer with WXPN MOC, Lee helped the noncommercial music station launch its expansion to the Department of Veterans Affairs Medical Center in Philadelphia.

In an interview with WXPN, Lee describes a touching scene from a patient’s bedside at the VA hospital:

[The hospital staff] weren’t sure that [the patient] wanted anyone to play for him … They told me that he liked church music, like gospel music. And I don’t know many gospel songs, but I know one, this song called ‘Up Above My Head.’ … He kind of looked over, peered over, because he can’t really move. He’s sort of listening along, and I finish, and he goes, ‘You forgot a verse.’ … And he sang the last verse with me. We sang a verse together.

This deeply personal connection between musician and patient is precisely what WXPN Musicians On Call seeks to foster.

“It’s about more than WXPN or Triple A,” said Shanahan. “It’s about creating a short, beautiful moment between patients and musicians.”

WXPN Musicians On Call was originally founded in order to “engage the community and give back some more,” Winnick said.

Fifteen years later, it continues to fill this purpose, allowing people of all backgrounds, talents, and abilities to share in the healing power of music.