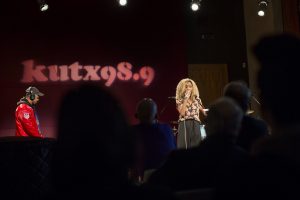 KUTX program director Matt Reilly described Austin as a sleepy college town when he moved there in 1998. Since then, the city has become a magnet for live music, culture, technology, and tourism with festivals like Austin City Limits and South By Southwest (SXSW). Today, Austin benefits from a live music economy estimated to be worth $2 billion.

Building on the wide range of music flowing in and out of Austin, KUTX has boosted its Adult Album Alternative (Triple A) format by intentionally showcasing Austin-made performers, venues, festivals, and the eclectic tastes of residents, in addition to artists from other cities.

“There’s a ripple effect,” said Reilly. “Someone hears a musician on KUTX, or goes to a Cactus Cafe show. They have dinner beforehand, spend money at the club, tip the bartender, maybe go out after the show, take a cab home, and pay the babysitter. So, it’s the businesses and nonprofits, restaurants, and bars benefiting but it’s creating lots of jobs for people in those businesses too.”

The Pittsburgh Music Ecosystem Project, led primarily by Pittsburgh public radio station WYEP, aims to sprinkle Western Pennsylvania with some of the magic that has led to Austin’s emergence as a music mecca. 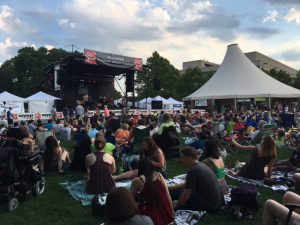 A survey commissioned by Pittsburgh’s tourism agency a few years ago found that visitors rated the area’s music and nightlife lower than other attractions. “A lot of us here have been asking each other why our music scene is not getting the same kind of love [that Austin’s gets]”, says Abby Goldstein, WYEP’s general manager.

That’s why the Music Ecosystem Project hired Don Pitts, former head of the City of Austin’s Economic Development Department’s Music & Entertainment Division, to help Pittsburgh plan its music transformation. The initiative conducted a series of public perception and economic impact studies that will inform concrete steps to strengthen the city’s music community in the months and years to come.

WYEP intends to remain one of the driving forces in that process for as long as it takes to yield success. 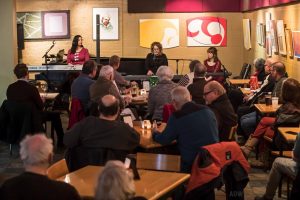 Little Theatre Café, operated by public radio station WXXI, is one of the biggest nightlife music attractions in the East End of Rochester, New York. The 70-seat venue offers live music every night of the week and curates an art gallery that rotates monthly.

The Café is connected to Rochester’s historic Little Theatre, a wholly-owned WXXI subsidiary that is the region’s only venue for arthouse cinema and a site for major live cultural events. It gives people from five Western New York counties, as well as visitors from around the country, the opportunity to experience live performances that are hard to find anywhere else nearby. Also, by attracting music lovers to the East End, the Café is providing a valuable economic benefit to Rochester and improving the city’s quality-of-life quotient.

“We’re keeping the spirit of love of live music alive in this area, both on the air and in person,” says Susan Rogers, executive vice president and general manager of WXXI. “It’s exciting and invigorating to witness live musical performance with your own ears and eyes, and we’re making that possible.”